People like drama, people like stories… that’s part of community, sharing and talking, it’s all about the story, don’t you think? People have been talking, that’s for sure!

On Friday morning I woke and as usual I check into Facebook, my ever faithful news source, which reveals the earthquake and Tsunami in Japan. I’m shocked and saddened. Having recently lost my father, my heart aches for the families who know they’ve lost someone, who worry they’ve lost someone and for all who are scurrying to save what’s left of their lives.

We were supposed to go sailing; we learn the harbour is closed. Kinda spooky. No, better safe than sunk. We get down to work, so much to do these days, then Chris gets an alert that between 11:30 and 1:00 the waves will hit here. It could be bad, it could be nothing. We phone a friend at sea level to see if he’s worried, does he need help? He’s not and no thanks. We decide to go to the new house & check on things; will it bring winds? We bring in anything that could break windows… just in case. Our neighbour, on the 3rd floor of the building beside us yells down something about 8 foot waves off the coast of California… if that happens here the marina water will be sucked out. She has a sailboat and she’s getting it out of the marina. She advises us to leave. We’re not worried.

We look down the beach, men are making sand bags, Chris figures they’re blocking doorways. Now I’m a teensie bit concerned. Finished tidying objects of concern we move to the top deck, water/nuts/crackers/cameras/radio/magazines/guitar with us, we plunk down on plastic chairs and look out to sea. A steady stream of boats leave the harbour… sailor’s know things, right? Should I be worried? Chris says if the water does come we’ll run through that doorway to the back of the house, K? Ok, great, we have a plan. I go out back and look to the street, neighbours behind us look out from their balconies, invite us to hang with them, they’re higher up. “We’re OK” I say… but get their suite number, just in case. They ask about the boats leaving, I tell them what I know. “What number is your suite” I scream, good got it. I go tell Chris, he’s not worried. I look down the beach, the fishermen are taking their nets and valuables from their boats. Fishermen know things about weather, right? There’s not a soul on the beach, other than the scurrying fisherman… I don’t remember ever seeing the beach secluded before, should I be worried? I look up from my scribbles, I’m glad I’m with my hubby, I tell him so. I love him more… He says the same to me. Chris remarks that it’s fortunate we’re a low tide day. More boats leave the marina, so many boats at anchor or sailing in the distance.

I regret not bringing binoculars. Update wills crosses my mind. I miss the kids. The wind picks up. Another boat leaves. The tide continues to go out, rather quickly mee thinks. My hubby serenades me on guitar, sweet! 2 people arrive on the beach ~ good or crazy, I wonder. Have they not heard the warnings? More boats leave. ADD sets in, I abandon my writing and check out the house, consider design options, ideas flow. Better get back on the deck. I look through design mags, lottsa inspiration… the tide goes out. The tides comes in. The tide goes way out! OMG, it’s happening, the water is flowing out of the marina. 2:15ish, There’s actually a current, it’s flowing fast. The water is so muddy. 2:20ish, the water is coming back in, too quickly… a marina marker buoy floats away… and another. 3 Fishermen’s Panga boats hit the rocks, fishermen run to help each other. 3 sailboats make it back into harbour. The harbour captain speeds out to stop others from doing the same. The water is muddy. A marina dock breaks apart.

I collect beach glass and shells on the beach, the tides so far out, there’s lots of good stuff. Chris gets concerned, calls me in. Friends stop by, we talk about it. Looks like the worst is over, in our town anyway. We go for a walk at night and learn the harbour captain is still not allowing boats in, 138 boats at anchor, we hear. Thing of beauty, all the mast lights shining out there. The boats are still at anchor in the morning.

Then friends send videos of the devastation in Japan. How to wrap my head around this, I don’t know.

Do kind things for others. Be a member of your community. Send money.

The sailboats come back in, 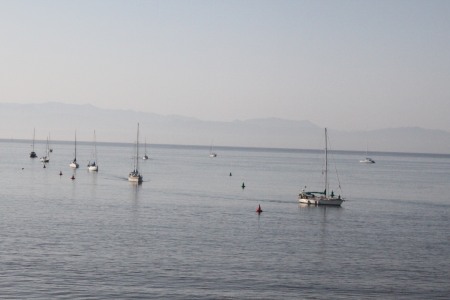 I see someone water skiing out front, people are strolling the waterfront, we even see a friend riding his horse on the beach. 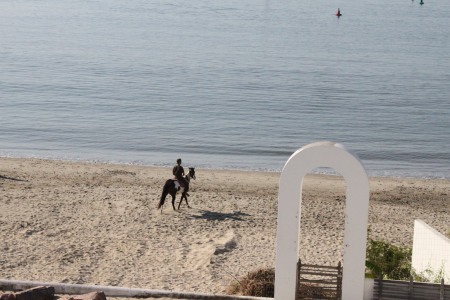 Buoy oh buoy!  These guys are just walking down the beach, minding their own business, when out of nowhere, a major buoy presents itself right in their face!  OK, it didn’t just appear there, it was “relocated” by the incredible water surge that occurred from the tsunami and its aftermath in our marina.  The tsunami raised and lowered the water level in the marina by over a meter and the initial surge tore this buoy from its’ anchor and also caused some further damage to the Marina’s piers.

We throw a ‘so-long’ party for friends returning to the states for awhile, our inaugural fire. Chris and I love visiting with friends, sitting around the fire! 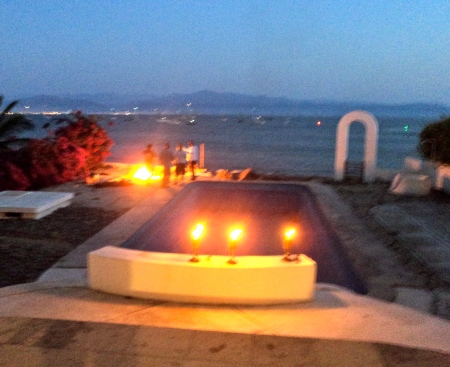 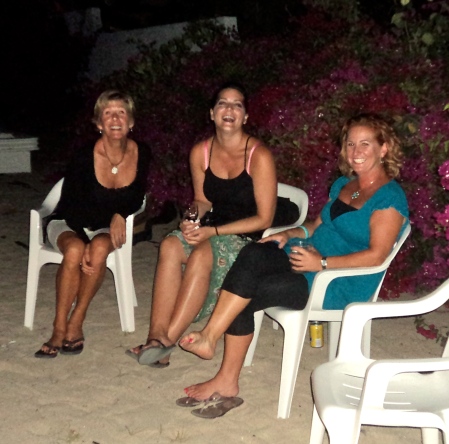 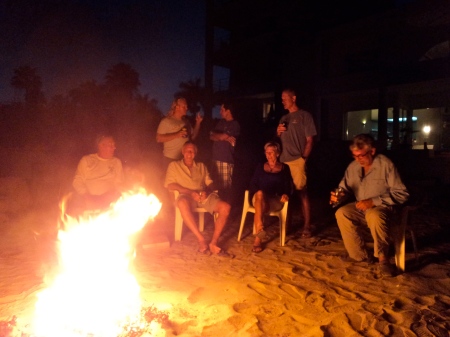 Seems everything’s back to normal here, in our small Mexican town and somehow that saddens me. The Japanese and those affected by the events in Japan are suffering and ‘back to normal’ will never again be their reality. A new normal, I guess, is all they can ever ask for now.

Then I get this, Japan Earthquake: before and after;

http://www.abc.net.au/news/events/japan-quake-2011/beforeafter.htm Please pray. Inspire someone today! Not feeling it? Be kind, be generous… be love!